Here we are again after the summer pause!

I tried to update the social channels as soon as I could so, those who are in touch with them received all the news I could catch in town.

I would like to start again writing the sweetest article I could, and here it is a brand new article on the sweetest event of the year: the final competition of Gelato Festival!!!

It is a European mobile show telling you all about gelato, its creation, the best ingredients, how it’s produced and the background to this sector. The event started on 2010 in Florence with the idea of celebrating the Florentine origins of gelato and showing them to the world, as Caterina de’ Medici did during the Renaissance when she went to France to marry Henry II of Valois. The creation of gelato is attributed to Bernardo Buontalenti, working for the Medici family in year 1559.

The Gelato Festival is an ambassador of Italian gelato.

What do you think? Could I miss the Event?

So I went on the “election day” and I was lucky because while thousands of people were eating ice-cream I attended the prize ceremony!

It was pretty fun. Winner Taco, the Algida white bear, made its happy return to the scenes and came to visit the show and people around.

Everything was perfect, even the sky which gave us one of the most beautiful sunsets…. 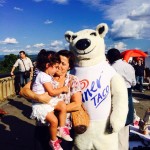 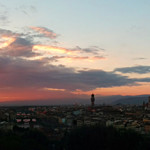 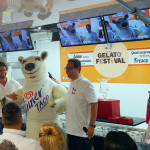 Winner Taco at the Ceremony

The prize ceremony was quite long, but fun. There were 2 anchor men one of which was Gabriele Poli the founder of Gelato Festival.

There was a certificate prize for each competitor of the finale and of course 3 beautiful plate glasses for the 3 winners.

A special prize was given to Vetulio Bondi as ambassador of Florentine Gelato in Europe, and another important prize was for Tony Cafarelli with prize “Ice-cream Explorer”.

The 1st prize reproduced the “Coppa Medici” with a special design inspired by the original Medici’s porcelain.

The Gelato Festival 2014 winner was Giovanna Bonazzi with flavour“Sbrisolona del 12 Apostoli con recioto bianco”, inspired by the famous“torta Sbrisolona” which I love. 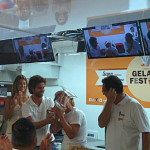 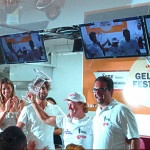 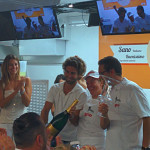 Now…let’s go to the ice-creams!

After the winner ceremony I was crazy to get an ice-cream…but many flavors were almost finished!!!

Of course I was lucky enough to get the winner flavor!!! 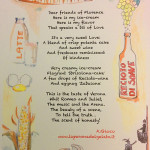 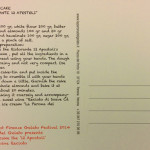 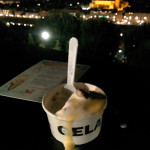 But I was very lucky to try the flavor “La grande bellezza” which was sublime for my tongue and for my soul. I will never forget. My personal prize goes to Monsue’ Rullo and to his wife who made me dream for a while.

Thanks to all the people participating to the event and to Gabriele Poli and his team, for creating a chance to spread and advertise our Italian food culture! 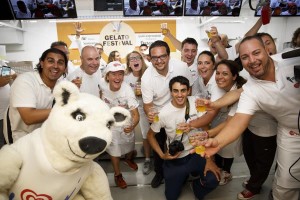