Campiello Prize: for the First time in Florence!

Campiello Prize was established for the first time in Veneto on year 1962. The name “campiello”, suggested by Industrialist Mario Valeri Manera and by publisher Edilio Rusconi, is inspired to the typical small squares of the Venetian public life style. Campiello should define a cultural event which name underlines the participation of a “mass” jury and a link to the city where the Prize was born.

The first Campiello Prize edition was on 1963, in the beautiful surrounding of San Giorgio Island; in the next editions it was hosted by the most representative Venetian locations as La Fenice Theatre and Palazzo Ducale. Since year 1963 with the book “La Tregua” written by Primo Levi, all the Authors winner of the Campiello Prize are still today real protagonists of the Italian literary history. 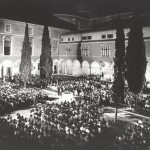 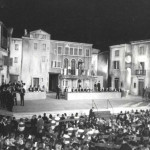 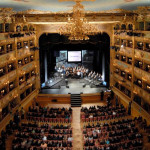 The very first idea for judging the winner is really efficient: a jury of Literary Experts (Giuria di letterati in Italian) identifies books published during the year and, in a public hearing, selects five of those as finalists. These books are called il Premio Selezione Campiello. Then , a second jury of 300 readers (called Giuria dei 300 lettori) representing different social, cultural and professional groups from each region of Italy, each with one vote, decides the winner of the selection. The votes of the 300 judges will remain secret until the Ceremony night, in order to guarantee a total independence of opinion.

The 5 finalists will receive a prize in money and the absolute winner will receive the “vera da pozzo”, a silver copy of the typical venetian water well, symbol of the prize and typical element of Venice. 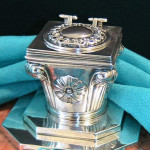 CAMPIELLO PRIZE: FOR THE FIRST TIME IN FLORENCE

ON THURSDAY JUNE 26TH 2014 – MEETING WITH THE 5 FINALISTS
At 6.30 p.m. l’Antica Torre di Via Tornabuoni n.1 will host the 5 finalist writers of the 52^ literary competition edition promoted by Confindustria Veneto

The Campiello Prize literary tour will stop for the first time in Florence. On Thursday, June 26th 2014, at 6.30 pm, the Antica Torre di Via Tornabuoni 1 will host the 52^ edition’s five finalist authors of the literary competition edition promoted by Confindustria Veneto, during the round of summer meetings with authors, coordinated by Fondazione Il Campiello. 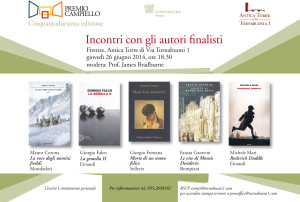 Antica Torre di Via Tornabuoni n.1, a XIII Century historical Residence, is located in one of the most elgant roads in the centre of Florence «our Tower follows our forefather’s memory tradition and since the beginning accomodated artists, academics and musicians. Today, we are proud to host one of the events of 52^ Cappiello Prize edition, coming for it’s very first time to Florence», says Giulia Rusconi Clerici owner with her brothers, of Antica Torre di via Tornabuoni 1.
Guest of the day will be Mr. Piero Luxardo, President of Comitato di Gestione del Premio. Anchor-man of the evening will be James Bradburne, Professor and General Manager of Fondazione Palazzo Strozzi, whom dedicated his activity to spread the concept of culture as essential part of life and as enrichment expression and human and civil elevation.

On end you will find the impressions the General Manager of antica Torre di Via Tornabuoni 1, Mrs. Maria Rita Bellini wrote only for us:

“Finally the big day arrived, it was months I was working to this project. I’m a real book-eater and when I’ve been in touch with the Campiello Licterature prize I was extremely excited especially because the Campiello organization have never been in Florence for the presentation with the 5 authors and I did all I could to convince them to come in Florence and much more, at the Antica Torre di Via Tornabuoni 1.
The date was June 26th 2014.
I should thank Veronica Triolo, one of my dearest friend, and with her help we have been able to ask to Prof. James Bradburne, President of the Palazzo Strozzi Foundation to became a “moderator” for that night and he was so kind and generous to accept our proposal. 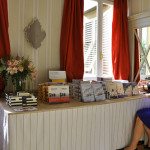 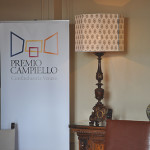 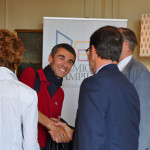 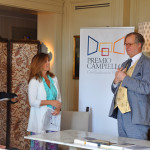 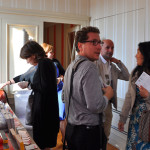 Everything was ready at that time and the authors came in our Salotto with their books and after the Salotto was full of our guests, the conversation started: it was so ineffable.
Prof. Bardburne entertained with interesting questions to the authors and the room was silent, completely surronded by the poetry of their masterpieces. 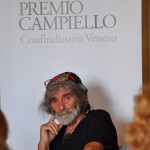 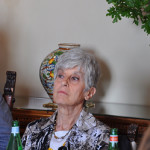 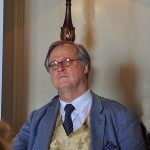 At the end of the discussion, which make us laugh and cry at the same time, we moved to the Arno Terrace where we had a finger food aperitivo with champagne in the main time the sunset was completely red and it was magical.
The night was ended with a private dinner on the roof and I wish, from the bottom of my heart to renew this appointment every year, especially for the city of Florence!” 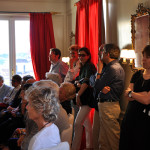 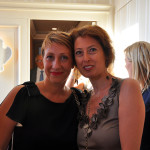 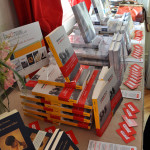